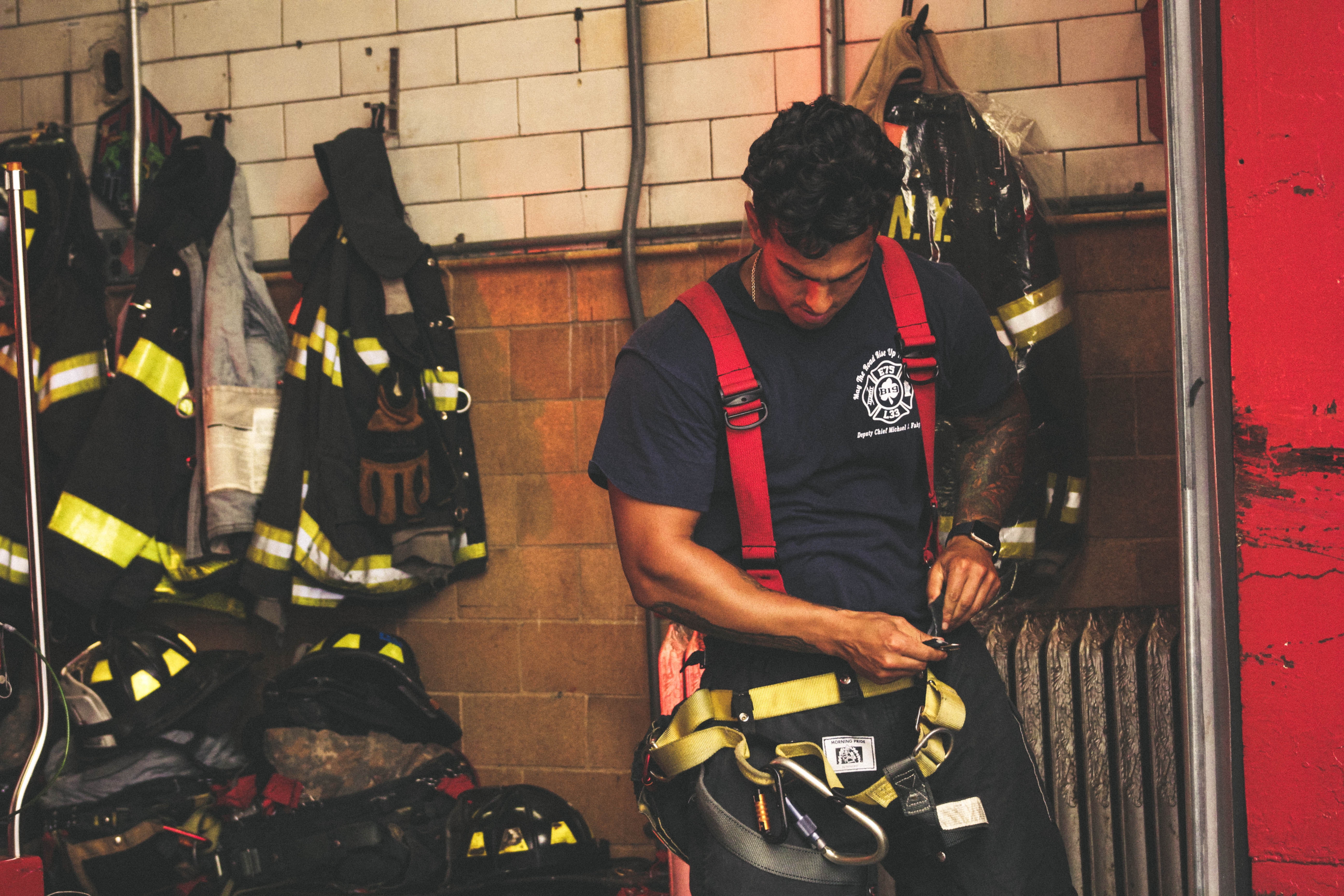 On the tenth anniversary of 9/11, I watched a documentary that forever changed the way I think about courage. In that television program, a cameraman originally chronicling the experiences of a rookie firefighter assigned to Engine 7/Ladder 1/Battalion 1 NYFD suddenly found himself at the heart of the World Trade Center attacks. Soon after American Airlines Flight 11 hit the North Tower, Jules Naudet’s camera captured the morning’s tragic sights and sounds as his battalion of firefighters scrambled to save thousands of innocent victims.

One particular scene forever stuck out in my mind: the battalion’s firefighters assembling in the lobby of the North Tower and preparing to rush up the stairs, in the hope of rescuing the victims trapped 90 floors above. Through the lens of the camera nearly ten years later, I looked into the firefighters’ eyes and witnessed their fear. I also saw their unflinching resolve to do their duty and save lives. I was impressed by how ordinary humans could show such extraordinary valor. It’s not that they weren’t afraid – it’s that they were absolutely terrified, but chose to charge in anyway.

By acknowledging the human fear these firefighters showed, I don’t mean to disrespect their heroism. In fact, my intent is not only to honor their bravery, but to pay tribute to it – because it was in the very moments when their fear was most intense that these heroes taught me the true meaning of courage. As the inferno raged above them, the rescuers heard the sounds of desperate jumpers’ bodies crashing into the metal and glass of the surrounding structures. Amid the churning smoke and the crashes of human bodies, the firefighters began their long, desperate climb, determined to save as many victims as they could. Despite their obvious fear, they barreled straight into the jaws of unimaginable danger.

When the World Trade Center towers collapsed less than two hours later, 343 New York City firefighters lost their lives, along with 69 other emergency workers. As Americans, the debt we owe them is immeasurable. We honor all 2,977 victims who died for freedom that terrible day in New York City, Washington, DC and outside of Shanksville, Pennsylvania.

Watching this scene unfold ten years after the fact, I realized that the meaning of true courage is not the absence of fear, but the act of doing what you believe is right, despite your fears. In all the years since I first thought of courage this way, I have yet to hear a better definition. Courage, I am convinced, is the determination to press forward in the very moment when fear cries out the loudest. Courage, then, is much more than a mindset or an emotion. It is a principle of action.

Thankfully, most of us will never face a test of courage like the one confronted by those first responders on 9/11. Yet virtually all of us face analogous fears in our professional and personal lives – even if most of those situations don’t carry life-or-death consequences. Throughout my more than twenty-five years as a CFO at Microsoft, Novartis, and Kodak, as well as in my work with clients in my executive coaching and leadership consulting business, I have seen these fears play out countless times. I’ve also seen many instances of true courage in the face of those fears.

Whether it’s speaking an unpopular truth in a tension-ridden business meeting, sharing difficult feedback with your boss, pulling the plug on a beloved but ill-fated R&D project, or blowing the whistle on long-standing unethical or illegal business practices, true leadership requires courage – the courage to stand up and do what’s right, even when the personal consequences might be terrifying.

Sometimes leadership demands courage of us in seemingly trivial moments too, or in moments that might not require as much courage of a person with different fears than ours. In one recent meeting, I sat with the leaders of a multi-billion-dollar international firm, discussing a massive global initiative that held immense strategic implications for their entire staff of nearly 190,000 employees. As we prepared for the initiative’s kick-off meeting, my consulting partner and I encouraged the leaders to arrange the room without tables – only chairs organized in a circle, so the participants would face one another without any physical barriers between them.

Our clients gravely pondered our recommendation. A business meeting without tables? Were we serious? We assured them that we were. After long moments of clearly painful consideration, one of the leaders bravely declared, “Let’s do it!”

Chalk up another victory for courage.

Taking courageous action may look quite different for different people in different situations. But when courage is continually practiced, even seemingly inconsequential moments of bravery strengthen a leader’s overall ability to rise above their fears and do the right thing – a capacity that can prove vital when facing dangers with much higher stakes.

As you read these words, no matter who you are, I am virtually certain that you’re feeling hobbled by your own fears in one way or another. What are you going to do about that? Will you continue to fall back on the excuse that you’re “just not a courageous person,” or “not principled enough?” Or will you, like those firefighters, acknowledge and accept your fear even as you rush into the inferno? My hope for you is that, like the brave heroes of 9/11, you’ll realize that the significance of fear pales in comparison to the importance of the mission you have to accomplish – and that you’ll do what you know is right, driven by the extraordinary valor only you possess.